Due to our sync licensing program this track is to be used for a forthcoming British film. Stay tuned for when it's announced. Holographic Mortal is a new music producer releasing music on Derelict State Records. Watch this space for releases and links to social media.

The Story of Trip Hop's Rise From Bristol

Sinuous and mysterious as a plume of drifting smoke, a new sort of groove wafted two decades ago from Bristol, a bohemian university town in the west of England. Though its prime movers — Massive Attack, Tricky and Portishead — all loathe the term, the word "trip-hop" has become synonymous with the style created by Bristol bands like Massive Attack and Smith & Mighty. The sensuous groove fulfilled a timeless human need for a bass-heavy sound to touch the secret recesses of the imagination and lure our dreamworld onto the dance floor. Trip-hop was tailor-made for the moment — and it happens every night — when a bopper wants to get tender. Or when domestic listeners seek to wander within themselves.

Not all local grooves take flight, but trip-hop most certainly did. Over the next two decades it was re-imagined as chill-out, downtempo, illbient and lounge music. Its subtle tendrils have woven into music round the world: Washington, D.C.'s Thievery Corporation, with their exotic cosmopolitan edge; drifty Brazilian sounds like Ceu, whose dulcet lilt earned her maximum market penetration (a Starbucks CD); London's Ninja Tunes' artists like Bonobo and Berlin's techno-tinged Sonar Kollektiv. As music writer Simon Reynolds notes, "People like Flying Lotus and Gonjasufi on the West Coast are doing trippy hip-hop. Though it's not quite the same thing, they probably are the inheritors of the spirit of Massive Attack, Tricky, Earthling and DJ Vadim." 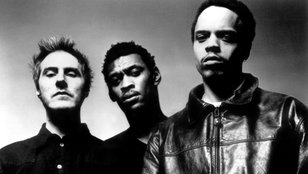 To qualify as true trip-hop, music has to share the sense of opiated mystery of Tricky's tantalizing mumbles on the classic album, 20 years old last year, that launched trip-hop worldwide, Massive Attack's Blue Lines. Its magical "Unfinished Sympathy," cast a spell over the world's clubbers. Produced by Nellee Hooper (later of Soul II Soul and Bjork, among many others) the well-timed sound was just one manifestation of a movement taking place in Bristol at that time.

Scene initiators included Smith & Mighty and the DJ collective The Wild Bunch, from which came Massive Attack and Tricky. The Pop Group's volatile post-punk added another element to the scene, later splitting into the savage free explorations of Float Up C.P. and horn-happy Pigbag.

Bristol fed off its slave port for hundreds of years; now it's one of Britain's blackest cities, culturally and socially. It's long been home to a West Indian community, and shebeens and sound systems were a way of life for all music-loving Bristolian youth. Being a port, Bristol was always awash in hashish and other plant-based mind-benders like marijuana — not to mention more macrobiotically sound, locally-grown life-enhancers like scrumpy cider and hallucinogenic mushrooms (legal back then) grown in the surrounding countryside — that undoubtedly fuelled Bristol's music scene.

Much of this musical experimentation took place at a club called The Dug Out. As Hooper has said, "The Dug Out couldn't have had a better location, at the top of the hill from St Paul's — the heart of the black music scene — and just down the hill from Clifton and the trendy punk/art scene. It was just dangerous enough for trendies to feel edgy, music cool and edgy enough to confuse and enthuse the dreads ... perfect!"

Disclosure: I got a chance to explore Massive Attack's creative process first hand over a few years. What follows is a typically incestous Bristolian saga. The links between town and gown — the students and the locals — plus the charming city's many liberal artsy types, made for a scene with a hectic social, creative and romantic dynamic.

Blue Lines was born in an upstairs bedroom of the terraced West London home of Afro-Swedish hip-hop diva Neneh Cherry and her producer husband, singer Cameron McVey. Before her solo hits began with "Buffalo Stance," Neneh sang with Float Up C.P., and as her first husband was Bruce Smith (drummer for the Pop Group and The Slits, with whom Neneh also sang), Bristol was yet another home to her. The young Massive Attackers, Daddy G, 3-D, Mushroom and Tricky, became Cherry and McVey's protegés. They took over the small side bedroom, soon cluttered with reel-to-reels and tape machines, and a record deck on which they would earnestly sift through possible samples. A superb chef, my friend Neneh would be in the kitchen concocting feasts in between writing rhymes, with Massive Attack wandering in for cups of tea.

Years later after the success of Massive Attack, Bristol has since spawned a new generation of bands and producers who carry on the tradition of innovation, creativity and west country uniqueness. You have the dark and experimental dubstep of DJ Pinch, the roots, reggae and hip hop of Laid Blak, the industrial, break beat and trip hop of Allflaws, and the soulful drum and bass of Dr Meaker. These are just a few artists who have taken a sound, city and culture and used it to inspire more great music. It all started in Bristol with the rise of 90's trip hop, and has continued to grow into many different forms of music, culture and identity.
In hip hop they say "keep it real", but for the purpose of this article I say "keep it Bristol"

This film goes into the underbelly of the Dubstep scene in Bristol and uncovers through interviews with DJ’s, promoters and punters a vibrant and growing scene. The film explains the Dubstep sound and how the Bristol scene started, highlights how producers make Dubstep tunes and plays live Dubstep sets and describes why the sound system is so important to the genre. If you are into underground music and subcultures then you cannot afford to miss this film. The film features DJ Pinch, Peverelist, Bubonic, Atik2, Hench Crew, Kymatik, Kidkut, Blazey, Stealth, Dub Boy, Wedge, White Boi, Gutterbreaks, Elemental, Search & Destroy, Skream, Chef and the Bristol Dubstep Massive. (including many hijackers)

In the seventh chapter of The British Masters series, John Doran meets Tricky, to discuss missing out on working with Kurt Cobain, and how he came to be onstage with Beyonce.

The eyes of the world have turned to the UK in recent years and have found some of the most exciting, genre-defying young artists to emerge from electronic music. But while London's scene can be fractious and hard to pin down, there seems to be something in the air in Bristol that unites its participants. Whether they're creating dubstep, house, techno or something else entirely, the cross-pollination in Bristol is unique. In RA's first official entry into video, we journey to Bristol to explore how the city has flourished in recent years, discovering why this small metropolis is one of the most influential electronic music outposts in the world today.

We have a few artists from Germany so this is a fitting insight to the scene. RA goes to one of the most special places for electronic music in the world: Berlin. When the Berlin Wall came down in 1989, techno became the underground soundtrack to the reunion between East and West. In recent years, it's become an international destination for ravers—a cheap place to party with clubs that are renowned throughout the world. Techno has become a business in the meantime. Yet Berlin still maintains a credibility that other cities lack. To understand why, RA went to the German capital eager to find out about its unique history and the reasons behind its continued relevance.

PressPlay - As The River Flows

We love this visceral and soulful track by PressPlay.

This album really explores the darker and intense sounds of Trip Hop, industrial Hip Hop and Instrumental Hip Hop. Merging these genres together with various strands of Electronica and Breakbeat to create a deep and interesting sound. Poetic rap vocals with lots of moments of distortion, melancholy, intensity and reflection.

Below you can check out Arcana and some of the latest Allflaws music videos.

Camila Fuchs creates experimental electronic pop with spectral vocals and avant-garde sensibilities. Currently based in Lisbon, the project was formed by Camila De Laborde (Mexico City) and Daniel Hermann-Collini (Munich) in London in 2012. This amazing track below (One On One) has a beautful soul vocal reminiscent of Bjork. Take a listen.